In a May 31 op-ed criticizing the administration’s brutal policy of separating families at the border, putting the parents in prison and sending the kids to institutions or foster placements, psychologist Margaret Sheridan and pediatrician Charles Nelson write, “If we have learned anything from 50 years of research on child development, it is that children do best in families and that violating this norm has terrible effects.” The researchers detail studies that found that kids raised in loving families did better cognitively, socially and in physical and mental health than those raised in institutions.

The next day, the National Domestic Workers’ Alliance, ACLU, Moms Rising and local immigrant rights groups around the country organized #FamiliesBelongTogether rallies and actions in many cities. Sweet pictures of children with signs they did not make spread across Facebook. Some of them held the hands of their two mommies. @WomensMarch tweeted, “From girls to grannies, women and children of all ages say #FamiliesBelongTogether!”

I, and everyone in LAGAI, is appalled by the cruelty of the current white house and frankly, all white houses we have ever known. This latest tactic of mass hostage-taking of kids to punish their parents for fleeing the impact of u.s. imperialism and global capitalism is horrific. But our desire to stand with those oppressed by our right wing government should not lead us to romanticize the nuclear family, which feminists have long known is the most dangerous place in the u.s. for children. 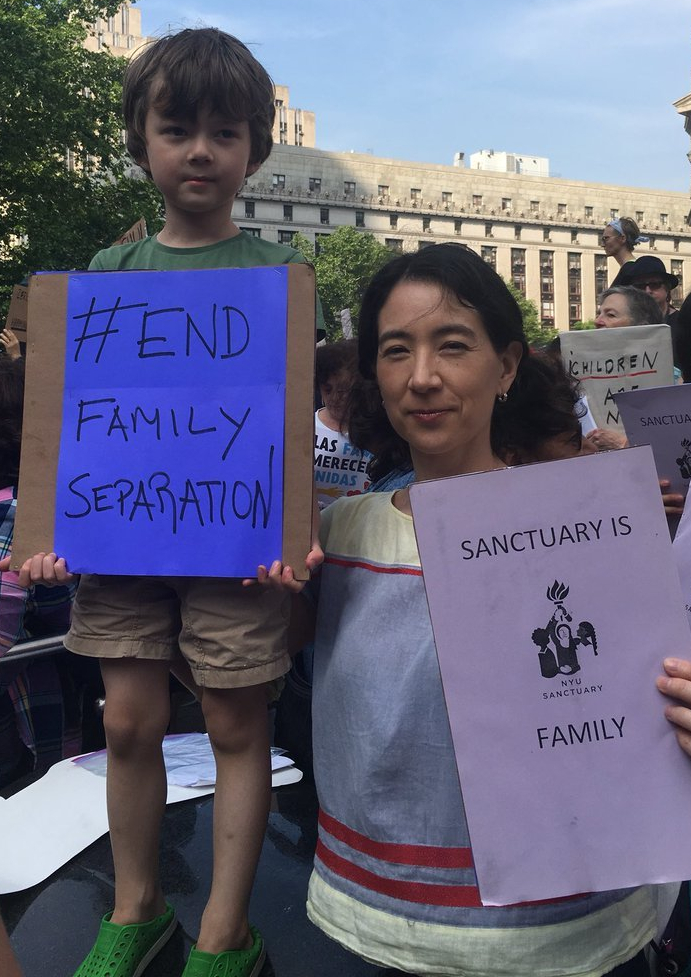 As a radical queer and feminist, I cut my activist teeth on the radical critique of the family, especially the nuclear family. When the Gay Liberation Front proclaimed, “complete sexual liberation for all people cannot come about unless existing social institutions are abolished,” the family was the first among the institutions they meant. The people who wrote that statement had come out of the sixties counterculture, where Weatherman jokingly declared National Kill Your Parents Day and Jerry Rubin didn’t trust anyone over 30. It produced works like Shulamith Firestone’s Dialectic of Sex, which proposed that all babies be conceived in test tubes.

Though by the time I came to consciousness the rhetoric had mellowed some, most queers knew that our families were not a safe or welcoming place for us, and we created our own loving spaces and relationships. We believed in collective responsibility for kids, made a point to have childcare at public events, and insisted that children were not the property of their parents and did not belong in “custody.” When the AIDS crisis hit, we haunted the ICUs and emergency rooms and sometimes had to battle our friends’ biological families for the right to be with them as they fought and died from the disease.

It is tempting, when we have serial rapists and harassers trying to dictate “pro-family” lifestyles by denying women control over their bodies and destroying lives of immigrants and people of color, for leftists, feminists and queers to proclaim ourselves the true guardians of the family. And the left, which has never been very comfortable with feminism or queer sexuality, appears eager to play that role. The climate justice movement, one of the more rigidly heterosexual that I have been in in a long time, is often dominated by talk of our children, grandchildren and next generations, unconsciously pushing to the side those of us who just care about the birds, the land, the water for their own sake, and our sakes.

My friend and fellow author Sue Katz, a long-time feminist and lesbian activist, who now focuses on fighting for old lesbians, wrote to the radio show Democracy Now! after they sent a fundraising appeal to “The Katz Family”: “I am so friggin’ sick of the Democratic Party (‘middle-class families’), of the labor unions (‘working families’), and now of you, of all people, using the term ‘family’ when you mean people. My bio family was marked by homophobia and I have almost no contact with them. I have no children. I am not married. I am not a family.” Sue points out that Democratic politicians and progressive organizations, including unions, started talking about “working families” when it became unfashionable to say “working class.” (https://tinyurl.com/suekatz-workingclass)

We must resist the impulse to make ourselves popular by embracing social conservativism. The family remains the most dangerous place on earth for women and kids, both in the u.s. and around the world. “[S]ome 500 children a year are murdered by their parents in the US, and millions more are abused and neglected,” writes blogger Vicki Larson in a 2017 piece entitled “There Is a Better Way to Parent Than the Nuclear Family.” According to researchers from the World Health Organization, the London School of Hygiene and Tropical Medicine and the South African Medical Research Council, “a war zone is not the most dangerous place for a woman. Her home is.” Their 2017 report stated that nearly 30% of women worldwide, and 33% in the u.s., experience intimate partner violence.

The statistics on incest that I learned when I started volunteering at San Francisco Women Against Rape in 1984 have not changed since then – between 25% and 30% of girls and 15-20% of boys are sexually abused, the vast majority by family members. Mia Fontaine wrote in The Atlantic in 2013, “Millions of Americans, of both sexes, choke down food at family dinners, year after year, while seated at the same table as the people who violated them. Mothers and other family members are often complicit, grown-ups playing pretend because they’re more invested in the preservation of the family (and, often, the family’s finances) than the … well-being of the abused.”

In a recent Washington Post op-ed, Lara Lillibridge says she never told anyone about her stepmother’s violence because “There were so few visible lesbian families that I knew that confessing my family problems would reflect negatively on the whole queer community.” Queer kids flee their families every day. Even kids who grow up with parents who are loving and accommodate their every whim sometimes feel they cannot thrive in those environments. If they are lucky, they end up with the families of friends or friends of their families. My landlord took in a number of her daughter’s friends during their high school years. Not all kids find those safe havens easily. Forty percent of the nation’s 1.6 million homeless youth identify as LGBT, according to the Williams Institute at UCLA Law. Some of them find refuge through organizations like the Homeless Youth Alliance, or LYRIC Center for LGBTQQ Youth, where 68% of those served are homeless or marginally housed.

When I got arrested at the Livermore Labs blockade in 1983, there was an affinity group in jail called the Anti-Nuclear Family. Two years ago, at the height of a hubbub over North Korean nuclear weapons, I went to the climate march in Oakland with a sign that said, “No Nuclear Weapons, No Nuclear Family.” I mostly got blank stares.

Our government is being run by people who have no qualms about changing their supposed values every day. But we are radical feminist queers and our values are not so mutable. We must hold to what we know: Kids should be in safe, supportive environments where they can develop their own awesomeness. That might be with biological relatives, or it might not. Immigrants should be welcomed, housed, fed and cared for, and their relationships respected, whether they are kids, parents, extended families, single people or groups of friends. We must lift up and support the work of kids who are self-organizing to protect one another, like those at the June Jordan School for Equity in San Francisco who raised $25,000 to bail out their friend, Hamid, from immigration detention.

LAGAI-Queer Insurrection is one of the oldest radical queer liberation groups in the U.S. We publish UltraViolet, a more or less bimonthly newspaper, which is mailed free of charge to over 1500 people, including over 800 prisoners. Our website is www.lagai.org. View all posts by lagai